(The morning breeze is deceptive; it is actually a storm in the making.

Who knows, even dew drops will acquire the power of torrents.)

Make allowance for poetic licence, but the mood that the protest movement against CAA, NRC, NPR has maintained this past month would have thrilled the stalwarts of the Progressive Writers’ Movement of which Majrooh Sultanpuri and Faiz Ahmad Faiz were key figures. In fact Faiz’s poem “Hum Dekhenge”, has clearly become the movement’s signature song. By singing the Kannada version at the Bengaluru Town Hall, M.D. Pallavi may well have inaugurated a trend in cultural commerce. Faiz in Maithili, Bhojpuri has percolated down to villages and hamlets. 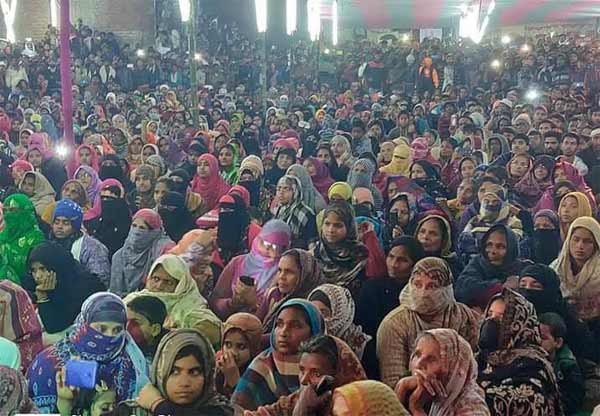 Since the movement has kept political parties at a distance, it is becoming possible for diverse elements of civil society to embrace it. Even the most conservative groups have accorded hospitality to Faiz. The dominant song at a social event of High Court judges, which I attended was “Hum Dekhenge”. No movement on this scale has so spontaneously spread across the length and breadth of the country.

That the unprovoked police attack on students huddled over their books at the Jamia Library ignited the agitation is common knowledge. How the videography and transmission of live visuals of the brutality disturbed the nation has a small story attached to it. It was entirely the imagination of Anwar Jamal Kidwai who, as Vice Chancellor, inaugurated the Institute of Mass Communications at Jamia in 1982. Bollywood, theatre, Doordarshan and countless of channels were all manned substantially by students trained at Jamia.

Since the Institute of Mass Com is the university’s flagship, students across the campus are familiar with its students and, by association, with videography. This explains the high quality footage of the events of Jamia which fired the nation’s imagination.

There has always existed a shade of uninstitutionalized apartheid, a wariness in visiting colonies and ghettos across communal lines. Every year during Ramadan I face, not resistance, but a lazy reluctance from friends to visit Jama Masjid to share the festive atmosphere. I have so far failed. For one “sehri” or the meal at dawn after which the fasting begins, I personally ferried Swami Agnivesh and Lord Meghnad Desai.

At the other end of New Delhi, the image of Batla House near Jamia has been sketched on our minds by the electronic media as a combat zone where encounters take place. To correct that image, visit the nearby Shaheen Bagh today.

Breaking down the apartheid of the mind has been a singular achievement of the televised nationwide protests led by students and youth. Another stereotype the protests have shattered is an image of cloistered Indian women, those in hijab and the ones in more cosmopolitan gear. Indeed, a heartwarming fact has been the leadership provided by women – articulate, dignified and focused. Standing upright for the National anthem mornings and evenings at Shaheen Bagh, and reading the preamble to the constitution like they had erstwhile read a religious texts – all of this is exhilarating, particularly after a depressing 2019.

The secularism this movement promises has on its visage a refreshing sincerity, compared to the stale, withered tokenism of recent decades. The secularism of a common struggle and aspirations is what India’s first war of independence had set into motion in 1857. With the British in control, the freedom movement never quite rediscovered that élan. Post Partition, a pall hung over the practice of secularism – a situation promoted and exploited by politicians. The current youth movement transcends gender, community, caste and language. It is defined by its simplicity, absence of pretense, and hypocrisy. It stands out like a lotus in a pond of murky politics.

The lotus must retain its pristine purity. The movement must remain aloof from the discredited political formations. Only then will it gather momentum. The critical mass will then grow. The movement’s demands, because they are honest, have already caused politicians to ponder. Look, how protection of democracy and the Constitution have become the centre piece of all discourse.

Since all social and economic strata are joining the movement, a resounding call for social justice is unlikely to invite a caste/class backlash. The movement will have to be sensitive to that call. Sectarian nationalism will have to slowly give way to what Tilak and Maulana Hasrat Mohani meant by “Swaraj” which embodied a notion of “sovereignty” which had a powerful anti-imperial thrust. Since the initial tussle has been with a formation committed to a unitary system, the idea of federalism will automatically creep into a renewed idea of India as protests grow.

The Sangh Parivar must be baffled by the upsurge. The RSS-BJP combine completely mixed up religious fervour with communalism. Religious fervour was mollified once the Supreme Court permitted the construction of the Ram temple. In a sense, the bird that laid the saffron egg was dead.

The Modi-Shah duet are under all sorts of pressure. The Congress Chief Minister of Chattisgarh, Bhupesh Baghel has, in an interview to NDTV, set the cat among the pigeons: the contradictory statements on, say, the NRC are a function of a growing divide between Modi and Shah, he says. Uddhav Thackeray, meanwhile, has compared, police action in JNU and Jamia with the November 25, 2008 terrorist attack on Mumbai. The BJP will, ofcourse, extract comfort from the opposition disarray. A coherent opposition is only possible if the Congress house ever acquires some order. This can only happen if the party leadership takes courage in its hands and holds elections to all key posts. A fixation on the Gandhi parivar will remain a huge road block to opposition unity. The opposition, sandwiched between a weakening BJP and a growing youth movement, will seek salvation in the regions. Federalism will be strengthened, which is just as well.