Thank you, Messrs Modi-Shah, you woke us up!

All thanks to you, Messrs Modi-Shah, for your thoughtless, unconstitutional and illogical actions starting with the hasty legislation on triple talaq to the abrogation of Article 370 and finally the utter idiocy of CAA-NRC, apart from the routine harassment, riots and lynchings in the name of ghar wapsi, love jihad and cows since your party came back to power in May 2014. You have awakened the sleeping Indian Muslim giant in a way he/she never was after the shock of Partition. Also, thanks to you exclusionary efforts, he/she has now joined the political and social mainstream as never before, especially after the gradual shunting and shunning of Muslims even by those who ruled and hoped to rule again and again using Muslim votes. 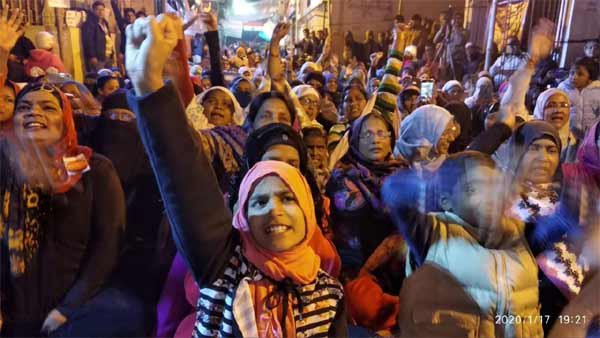 Thousands of demonstrations are taking place every single day since 15 December all over the country on a scale never seen earlier in this country. The illegal, brute force used by your police in Jamia Millia Islamia, U.P. and Karnataka towns was directly responsible for this reaction. Dozens of “Shaheen Baghs” have sprung up are going on adamantly all over the country for weeks despite brutalities and harassment by your forces and goons. This provides a proof that the genie is finally out of the bottle where it was safely corked after Independence.

This spectacular change came from totally unexpected quarters – from our students and youth and particularly from our women who were written off as silent spectators in a world dominated by men. Our women have proved that they are more intelligent, braver and greater strategic thinkers than our men who had either capitulated or were still thinking about what to do when our women plunged into the agitation and showed the way attracting support from all quarters at home and abroad.

Far from being marginalized as you planned, Indian Muslims are now leading the political movement for change and progress. Muslims and others have realized that Indian Muslims can be good Muslims and good Indians all at the same time. Thank you Messrs Modi-Shah, thanks to your myopic and narrow approach, Indian Muslim, holding the tricolor in one hand and a copy of the Constitution in the other, can now hold his/her head high and say, garv se kaho, hum Muslim hein.

The issue of CAA-NRC is only a part of the current agitation. It has evolved into a national movement to restore Constitution, Democracy and Secularism, the three pillars without which India has no meaning or place in today’s world, and you and your ilk thought that your temporary majority in Parliament allows you to demolish these basic pillars of our polity and install a Hindu rashtra where only upper castes will be equals. India will never be the same again. Messrs Modi-Shah, pack your bags and go, the sooner the better for you and for the country.

The writer is Chairman, Delhi Minorities Commission. These views are personal. He has authored many books, some of which are available on pharosmedia.com/books