What should Shaheen Bagh stalwarts do now

Sharjeel Imam in his now famous speech got much wrong and mixed up, but arguably his view that Shaheen Bagh has served its purpose was spot on. The stolid protest in face of the harshest winter in a century by intrepid women of the locality, with heart-warming support from many sections from outside, energized the pan-India protest, earning its place in history as symbol of the most widespread stir over the last forty years. 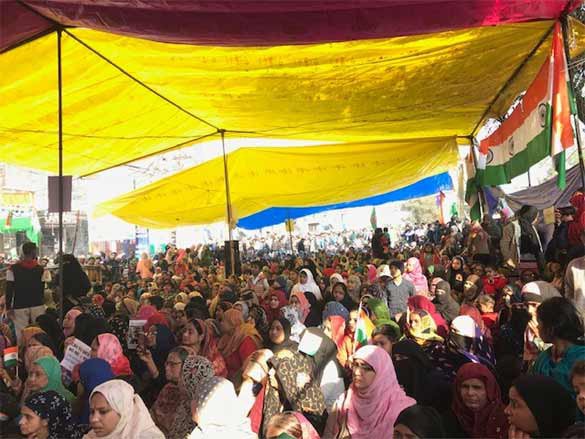 That the regime is rattled is clear from Prime Minister Narendra Modi smelling a foreign hand behind the protests in his speech on the Delhi campaign trail. His national security minders – led as they are by a veteran intelligence hand – are aware of the civil society networking that has propelled protests this century across the world. Intelligence agencies routinely see these in national security terms and negatively at that.

A case to point is the overthrowing of the Serbian genocidaire, Slobodan Milosevic, in 2000 by a non-violent civil society movement led by a non-governmental organization, Otpor. Otpor was the local recipient of training in non-violent methods of opposition articulated by activist-academic Gene Sharp by the United States’ quasi-governmental institutes. The experience was then shared with counterparts in Georgia, leading to the downfall of Eduard Shevardnadze there.

The tumult surrounding the Arab Spring is seen in similar light in national security circles. Consequently, the response also borrows from the manner Arab regimes have coped with the buffeting. Besides the normalized policing template dating to colonial times of severe crackdowns, one manner they have done so is by unleashing pro-government forces in civil society to tackle such protests.

The trailer is already visible in Delhi. Lone wolves have attacked protestors at both iconic sites of the protest. Though there was thankfully little damage that presumably was never the intent. As pointed out by observers, it is psychological war.

The next step is now somewhat self-evident. The Bhartiya Janata Party has deftly used the protest for furthering their usual dog-whistle politics. They seek to use the polarization to displace Arvind Kejriwal. It is obvious that what the prime minister in his speech indicated as a “political conspiracy to destroy the country’s harmony” would not be allowed to continue once elections are behind and the utility of the protest for them ends.

Since the government’s strategy is in plain sight, the core group of informal leaders behind Shaheen Bagh could be alerted. The sister protest at Jamia Millia Islamia is not in the same category since though on a public road that passes through the campus it does not impede the traffic there. The police cannot possibly use strong arm methods on a university campus twice over, having noted the all-India fallout last time round.

This is not the case with Shaheen Bagh. While the protest there is on one side of an atypically-wide road, the police deliberately went overboard in sealing of a considerable stretch of the road, as also the other carriageway. As a result, the inconvenience to commuters is being blamed on protestors, thereby enhancing the BJP’s electoral chances.

The conditioning of the people that the protestors are a public nuisance is to legitimize the impending crackdown. As to its timing, it may be as early in the hiatus between elections and results, in order that any adverse fallout is tidied over before President Trump comes to town month-end.

Given the vulnerability of the women protestors to policing methods, it is best that Shaheen Bagh stalwarts consider their strategy. Some hotheads might want a showdown, hoping to gain leadership reins of the community. There is also the element of loss of face to step back when faced with chilling threats from no less than the prime minister, who wears his reputation on his sleeve.

Under the circumstance, strategic sense implies giving emotional decision-making a vacation. It simply would not do to put women in harm’s way.

Thus, Shaheen Bagh has four options: (a) the non-starter option of retreat; (b) a feasible option to relocate to a viable space in the vicinity; (c) a modified manner of continuing in location; and last, (d) a dangerous one of continuing with the status quo. Three being self-explanatory, the third (c) is dwelt on here.

Since the police is responsible for over-zealously shutting down the road, it should be speedily petitioned publicly to open the wide carriage way on the other side. The protest site must in the interim shift completely to one side, including the giant India map that is on the side to be opened up. The site must be screened off along the divider from the side to be used by two-way traffic, with police suitably posted for security. Delhiites are used to the Delhi Metro and such like construction works that impede traffic and will surely prove understanding.

The police rationale is that the barricading is for security of the site. This is a circular argument since the police’s cutting off commuters is being cited by those threatening the site as the reason for their angst, such as was done by the gun-toting milk vendor apprehended at the location. Besides, with elections over with, any threat would recede.

The media and social media should be invited to be shown on ground that it is not the protestors but the police that is imposing on commuters. This should be done in real time so that the Delhi electorate can make up its mind on the ‘facts’ that they have been fed on the protest so far. The police, looking over their shoulders to Amit Shah’s ministry for orders, will unlikely oblige, enabling voters to know where the matter rests.

Such preemptive action will ensure that not only is the BJP kept from power, but that its impending action – inferred from the ruling party’s election time rhetoric – is denied legitimacy. The BJP would not be able to claim in the unlikely case that it gets a mandate that it is empowered to clear non-violent protestors with muscle.

Not that the BJP needs a nod from Delhiites to take out Shaheen Bagh. It would do so regardless, especially since the Iron Man II, Narendra Modi, has stepped in where underlings like Ajay Singh Bisht and Anurag Thakur have held sway so far.

Finally, the protestors could elect or nominate their leaders to take up the law minister’s somewhat pompously put invite that the government is ready for ‘structured talks’ to explain to the protestors why they are mistaken. At the table, the tables must be turned and Ravi Shankar Prasad explicitly left with the notice that not only will Shaheen Bagh be back with a bang, but there would be multiple Shaheen Baghs, in case the government proceeds with the next step in Amit Shah’s chronology, the National Register of Citizens.

Following this, the landmark protest at Shaheen Bagh could consider adjourning till the government’s missteps down the road require the women of Shaheen Bagh to once again read it the Preamble loud and clear.