The firing incidents targeting protestors against Citizenship Amendment Act (CAA), National Register of Citizens (NRC) and National Population Register (NPR) demand a serious analysis from several angles. First, of course, as is most obvious that the incidents took place despite policemen present at the site in Jamia Nagar. As some video-clips indicate, initially, policemen took no action against the shooters. These incidents, three in a week, took place just ahead of the Delhi Assembly elections. The alleged criminals shouted fiery religious slogans while indulging in their crime. Similar slogans were voiced by the criminals in three incidents. In the first case (January 30, 2020), a student was injured. Nobody was injured in the second and third cases (February 1 and 2, 2020). While police caught the criminals in the first and second cases, in the third case, the assailants escaped. 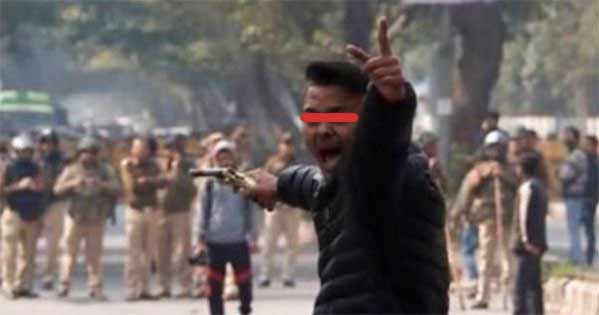 Presence of heavy police-force certainly suggests that adequate attention was being paid to security arrangements in Jamia Nagar, where the demonstrations were taking place at the time of these incidents. But that the firing incidents took place despite this compels one to reconsider as to whether security arrangements were adequate. Prior to blaming the policemen for not having taken required action, it may be appropriate to give them a benefit of doubt. It cannot be denied that heavy rush of demonstrators has been there in Jamia Nagar at Shaheen Bagh and Jamia Millia Islamia. With the crowd swelling to hundred thousand and more, practically every day, it was probably not possible for policemen to keep an eye on who could cause a disturbance. Besides, security arrangements were not apparently up to the mark. It was probably not possible to keep a check on bag and baggage of all participants gathering at the site. Whether it was/is possible or not is debatable but at present it is clear that just the presence of policemen was and is not sufficient to ensure adequate security arrangements in any crowded area.

The religious angle displayed by the shooters probably bears a greater significance than insufficient security provided by police-forces. It is possible, if Delhi Assembly elections were not scheduled, the three firing-incidents may not have taken place. The ulterior motive behind these incidents was probably to gain media coverage.  They may be described as an attempt to polarise vote-banks along religious lines and gain “Hindu” votes in favour of Bharatiya Janata Party (BJP). There is no denying that Aam Aadmi Party (AAP) posed a great risk for BJP’s electoral chances in Delhi polls. BJP did not wish to lose Delhi Assembly elections again. Prior to AAP, Congress held power of Delhi State with Sheila Dikshit as chief minister for three consecutive terms (1998 to 2013). In other words, BJP has not been able to form the state government in Delhi since 1998.

Moreover, loss of Delhi polls would mean BJP facing yet another defeat in assembly polls, following Maharashtra and Jharkhand. In Haryana, BJP succeeded in forming the state government only after reaching an alliance with a regional party and several independent legislators. BJP was not prepared for these regional shocks following its stunning victory in 2019 parliamentary polls. And so it seems quite natural for the party and the saffron brigade associated with it to go overboard in trying their hands at all possible tactics to win Delhi elections. Now, the big question is as to why does it seem so? From this angle, how can firing cases be linked with the saffron brigade’s political strategy?

Religious slogans shouted by the alleged criminals were just a mild indicator of this political tactic. That these incidents came soon after a BJP leader said that the protestors should be shot cannot be ignored. He also called participants in anti-CAA-NRC-NPR demonstrations as anti-national traitors. Besides, through various outlets of communication, including WhatsApp, substantial attention has been paid to linking anti-CAA-NRC-NPR demonstrations with primarily Muslims and leftists. The fact that these demonstrations would not have reached such a stage without participation of secular non-Muslims has not been highlighted by those linked with secular saffron brigade. This point is also suggestive of a deliberate strategy being exercised to project secular protests at Shaheen Bagh and other places as only a Muslim affair in the hope to capture Hindu votes.

What perhaps is most significant is the nature of shootings indulged in by the alleged criminals. Except in the first case, nobody was injured. The shots were fired in the air. Even though the assailants were described as “mentally unstable,” they probably fired in the air with a deliberate purpose. Their aim, apparently, was not to seriously injure and/or kill anybody. That would have probably spelled a long jail term for them and also directed greater attention at the victims than at assailants and their religious slogans. Also, it is possible that these people were paid to indulge in these activities. Perhaps, these individuals, the alleged criminals, acted as pawns in a game planned and directed by more powerful parties and/or persons!