Delhi Assembly Elections 2020 and Beyond – Will Kejriwal Come to Shaheen Bagh?

India, in spite of being the largest democracy, has lived up to its irony of tryst with destiny, nay, dynasty – worshipping the personality cult that has often defied populism. And there’s no better example to this than the Indian National Congress (INC), from Nehru, to Indira, to Rajiv; but probably failed by Rahul (perhaps Sonia pampered him too much!!). If INC has been washed off Delhi; as well as from the national polity today, it may be because of numerous reasons that have been created by INC itself; the primary one being – taking India and Indian voters for granted. The 2015 and subsequent Delhi Assembly Elections must serve as a claustrophobic warning to the INC about its sinking ship, and the lessons learned must be analyzed and documented well. 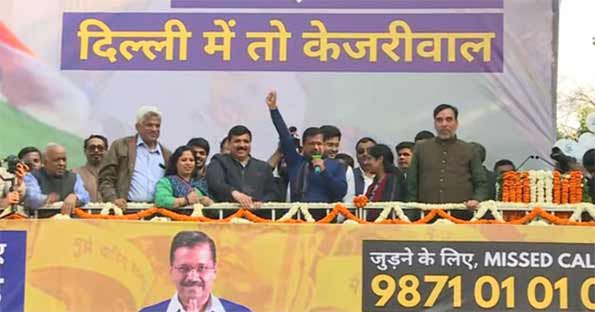 The election result trends of Delhi Legislative Assembly from 2013 and onwards speak a lot about the changing pulse of Delhi; and the country. Since the Muslim Indian citizenry is equally botched up with the INC and personality cult worshipping, it’s also an opportune time to extrapolate the Delhi Assembly Elections 2020 results from this perspective. This is critical because failure to read between these lines of altering political landscape could be detrimental for the entire Muslim Indian citizenry.

Feeling the Pulse of Delhiites

Although the 2015 and 2020 Delhi Assembly Elections may show some new trends, we must analyze the Delhi Assembly elections historically, at least from 2003, to feel the correct pulse of Delhiites. The selection of 2003 as the baseline is significant because up till then, INC had been holding the monopoly of governing Delhi. Likewise, INC led by Sheila Dikshit staked the majority claim by bagging 47 seats in 2003 as well; however, the scripting of the beginning of the end of INC might well have been started in 2003 itself.

In 2003, Bhartiya Janata Party (BJP) emerged as the second largest party in Delhi with 20 seats. The trend was retained in the succeeding 2008 elections; INC won 43 seats (a loss of 4 seats compared to the previous elections), while the BJP stood at 23 seats by gaining 3 additional seats. The 2008 Assembly Elections in Delhi once again saw the usual trend of INC winning but with a 9% decline in its vote share and BJP gaining by 15%. Further in 2013, Delhi swooned to the “Narendra Modi” wave along with the entire nation. In this election, BJP gained a significant 35% in this election, and INC’s vote shared declined by an abysmal 81%. Come 2015, and the INC was wiped off the map of Delhi altogether.

Delhi, it seemed, had finally decided to disown the INC once and for all. The reason behind this decline for the INC was two-faced – one being the Commonwealth Games scams and the other being the Narendra Modi wave that had swept across the nation then. AAP made its debut in Delhi in 2013 by bagging 28 seats. This is when and how Arvind Kejriwal of Aam Aadmi Party (AAP) caught the pulse of Delhi and inaugurated his political adventure.

Kejriwal has one of his kind of political shrewdness, which enabled him to form the government in Delhi in 2013, in spite of AAP being the second largest party. With only 28 seats, it did succeed in forming the government; however, was still too nascent and naïve to make a significant political mark as yet. Although the INC offered its support to AAP, it could never do away with its unprofessional superiority complex, which ultimately resulted in the usual political pandemonium of a hung Assembly. Kejriwal resigned as Delhi’s CM too soon in 2014, but his wait for the correct time and bait did bear awesome fruits in the subsequent 2015 Delhi Assembly Elections, when AAP came to power with a whopping 67 seats.

The point to emphasize is that in 2013, AAP won what INC lost, and probably a little more; however, INC was completely washed off in 2015. While there may have been a casual shift of voters from INC to AAP in 2013, the trends were brutally altered in 2015. One significant reason that contributed to this massive landslide victory of AAP was the ironical personality cult once again – this time in the form of Arvind Kejriwal – a face that held high hopes with respect to the “anti-incumbency” factor. That the BJP has also risen to power with the same cynical personality cult – which thrives on the obnoxious and paradoxical capability of exterminating the Muslims and getting pleasingly out of it all – may well form the script of another political story, which I shall reserve for some time later.

So, is Delhi eventually waking up and rising against communalism and the rhetoric Hindu-Muslim and “Us vs. Them” polarization? The Delhi Assembly Elections 2020 seem to be a major disappointment from this perspective. The Delhi of 2015 that had brought down both the INC and BJP on their knees is now showing a dismaying and tragic upward trend in favor of the BJP. What this suggests is the heartbreaking concurrence that the Delhi of 2020 is not the same as the Delhi of 2015. The Delhi of 2015 had disowned the INC, but the Delhi of 2020 is yet not ready to disown the BJP. And this could be empirical and detrimental for Muslim Indian citizenry.

What then, has let down the BJP so abjectly? A wrong question at the wrong place. Ever since BJP came to power in 2014, it has always relished and succeeded in its hatred and polarization blitzkrieg, even in Delhi 2020. First, the percentage of BJP’s vote share has increased by more than 150% (167% to be precise) compared to 2015. The overall vote share of BJP stands close to 40%; implying that BJP succeeded in polarizing 40% of Delhi in spite of all developmental efforts by AAP, which is highly disappointing.

Second, the percentage of voter turnout in Delhi Assembly Elections 2020 was 62.59%, almost 5% lower than that in 2015. Why did the remaining 37% not vote? The answers could be many; however, probably the most imperative one is that these 37% may be indifferent to both development and polarization, and apparently indifferent to India itself. Would they have voted for BJP if at all they voted? Probably yes, maybe later if not in this election; because jingoistic nationalism and saffron “bhakti” begins with indifference.

In summation, discounting 40% of total voter turnout who chose BJP (which counts for 26% of the total electorate), and assuming a similar mandate for the remaining 37% of the total electorate who didn’t turn out, roughly around 31.72% of Delhi is eventually polarized or at the brink of being polarized. So, let’s stridently spell the fact that polarization and hatred against Muslims and Muslim identity is here to stay.

Will Kejriwal Deliver a New India?

Kejriwal has been gaining rapid acceptance since his Aam Aadmi Party began its political exploration in 2013. His ingenuity is reflected in the way he has mastered the ploy to offset BJP’s campaigns against him. He has managed to attractively package his achievements and clinch Delhi’s political mettle from the BJP based on progress, evolution, and wellbeing of Delhi. And he has done it well, all thanks to Prashant Kishore! To that extent, Kejriwal is politically shrewd, like any other seasoned politician, and it is inoffensively harmless.

Unless this political shrewdness is combined with abject opportunism. The murkier side of this antidote relays that unfortunately, Kejriwal has also been practicing opportunism. His indifference towards Muslims is more than evident. He has openly supported abolition of Article 370 and 35A and has never attempted to exhibit any outright and authoritative stand on the CAA/NRC issue. He has also not shied away from demonstrating his soft Hindutva stand whenever it has made sense.

Kejriwal may not be as big a name as to be reckoned in the national political arena yet. Will Kejriwal be able to ingrain his footing at the national political arena soon? This is precisely where India’s ironical tryst with dynasty plays off against him. There are dynastic stalwarts in both the BJP and INC who still outweigh him in terms of a national footing, and who have all the latency to disrupt any attempt of his ascent to the national arena in the near future.

Kejriwal may have all the qualifications, capabilities, experience, and spirit to emerge as the leader of a third political front at the national level that can steer a strong anti-incumbency drive to overthrow the Right Wing. However, he is overbearingly stubborn and cannot override his superiority complex well enough to form or lead any third front. He is far from separating his political shrewdness from ordinary opportunism. He must also learn from INC’s oversight of taking voters for granted too much!

Kejriwal first swept into the hearts of Delhi largely due to his anti-incumbency face against the Commonwealth Games corruption. To put it simply – Delhi was refined enough to see an unprecedented alternative in his visage, a face strong enough to outlive Congress’ tryst with its own dynasty. This may not be the case with voters in rest of India simply because their priorities are different. Kejriwal does talk about development, but development is not a priority for those struggling for survival. When survival is at stake, ideology becomes the priority. Unfortunately, Kejriwal doesn’t have an ideology strong enough to repel the formidable Hindutva ideology, which is an apparent solace for many unemployed and displaced across the nation. To put it straight – this is how the Hindutva ideology strengthens and intensifies Saffron “bhakti”.

Then, there are those who wish for development, and development comes at a cost. Freebies with subsidized electricity and free bus rides to influence voters when at a political crossroad may be affordable once or twice. How far would Kejriwal be able to offer these freebies to the entire Indian populace, and at what cost? And to put it straight, Kejriwal himself would probably not wish to play in the national arena as of now – which breaks any myth around Kejriwal working on delivering a new India.

Will Kejriwal Come to Shaheen Bagh?

Kejriwal has cautiously avoided the controversial issue of Citizenship Amendment Act to safeguard his opportunism and his chances to win. Though he has been categorical in articulating in an interview by Times Now that CAA is not what the nation requires at this point (he even voted against it in the Parliament), he has also been abstruse enough to spell that he would have visited Shaheen Bagh but his visit to Shaheen Bagh protesters will not solve the issue. In the same interview, he sarcastically comments that the CAA can be solved in 2 minutes, but solving it is the responsibility of the Central Government, not his.

In the same Town Hall interview, Kejriwal talks about focusing on development and economic rebuilding of the nation. Would he be candid enough to verbalize how would the shape of this development and economic rebuilding look like for the Muslim Indians (who have been citizens of India all through) who are at the brink of being displaced as “illegal immigrants” through CAA/NRC; taking Assam as a live example?

His soft Hindutva also became apparent when he first publicized his visit to Hanuman Temple and later claimed victimization by the BJP on that issue. Is he really so naïve to suddenly fall for reacting to BJP on this issue, after having so cautiously avoided all controversial provocations from the BJP? Nay – the victimization card here was just meant to be a soft Hindutva stance to implore the slightly less polarized voters.

Coming back to this invariant question – will he visit Shaheen Bagh? Going by all the precedents, the answer may not require an artificial intelligence algorithm to decode. But for the time being, I leave it for the readers to answer it.