Shaheen Bagh is a template for India’s unity

The commentaries on the Citizenship Amendment Act (CAA), and National Registry of Citizens (NRC) Act from a large number of learned and distinguished Indians including Nobel laureates, retired judges of India’s Supreme Court and other luminaries have opined that these Acts are discriminatory against the minorities and divisive for the nation. 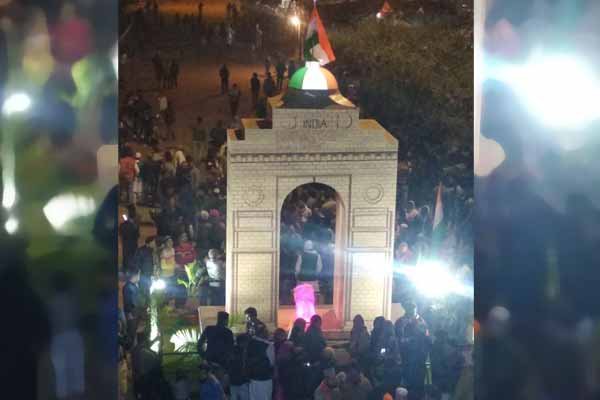 The BJP government expected that opposition to these Acts will come from their rival opposition political parties.  But they were surprised when intense spontaneous opposition exploded from groups of students at many universities across the country, where the number of minority students is about 4%.

The biggest surprise is that a bunch of women from the lower-middleclass locality of Shaheen Bagh in the New Delhi suburb of Okhla, have organized a pacifist sit-in campaign against these Acts, emulating Mahatma Gandhi’s iconic Satyagrahas of India’s freedom movement.  Indeed, they kept the organization of the campaign entirely in the hands of local women, not letting men get involved. Not only these ladies, majority of whom happen to be Muslim, braved 2 months of the coldest-in-a-hundred years Delhi winter, with awful cold and rain, sitting under a flimsy tarpaulin tent and sleeping on the road, they have successfully thwarted the pernicious attempts of several politicians to give a sectarian color to their agitation.

Indeed, three weeks after they began the Satyagrah, a Muslim religious leader visited Shaheen Bagh protest and proceeded to give a religious sermon-like lecture.  Within a few minutes, one of the local women leaders nudged him and politely told him to stop his lecture, since this was a composite Indian nation campaign.  Similarly, they did not allow a single politician space or time in their 2 month long and continuing rally.  Instead of displaying any symbols or flags or singing songs of their Muslim community, they have persisted with displaying the national flag, pictures of Gandhi, Ambedkar and other heroes of India’s freedom struggle, reciting the preamble of the Indian constitution and singing a variety of patriotic and national songs.

The ladies of Shaheen Bagh who had earlier spent their lives at home mostly looking after their families, that even included a few grandmothers, had never taken part in rallies or political campaigning. Yet, they have demonstrated remarkable political skill and strategy in managing this critical movement for the composite soul and unity of the nation.

Spurning all controversy, they invited a delegation of Kashmiri Pandits to their rally and expressed full solidarity and sympathy with their suffering.  They invited a horde of Sikh farmers from Punjab to sympathize with their long-standing sufferings vis-à-vis their farm loans. Being Urdu speaking themselves, they invited Tamil, Telegu and Malayali Hindus to discuss their issues at their rally.  In Shaheen Bagh, the ladies established temporary book stalls and painting displays, organized poetry and folk music sessions and lectures by a horde of grassroots activists.

Indeed, with the highly contentious Delhi state election happening on their watch, in the face of threats from the mighty to “send a current through their stayagrah sit-in”, and facing down actual shooting by some rogue elements, the shaheen Bagh ladies faced down the mighty, who dared not mis-speak.

Success breeds success. So, in the weeks that followed the start of Shaheen Bagh, about a dozen such grassroots women’s campaigns against CAA, NRC, and to unite the diverse nation have sprung up in many a city throughout the country.  Shaheen Bagh has proved once again that the Gandhian pacifist Satyagrah methodology, that is inclusive of everyone and abhors discrimination against anyone, is an invaluable template to save the nation from internecine discord that breeds disunity and threatens us with national calamity.

The writer is the executive director of The Association of Indian Muslims of America, Washington DC.  kaleemkawaja%gmail.com