Clearly, the recent phase of Delhi-violence may be viewed as a wake-up call for the entire nation. If it is Delhi now, the same may be re-enacted in another part of the country later. Nobody would want this to happen but certainly this phase has raised perceptions about the degree that politicking can stoop to, all for the sake of a few select interests. Yes, let us keep this in mind, rioters – irrespective of their religious/or social background – cannot be regarded as representatives of any community. Let us not forget, demolishers of Babri Masjid were not even a minor fraction of Indian Hindus. Also, Gujarat-carnage did not spread across the whole country or even the whole state. 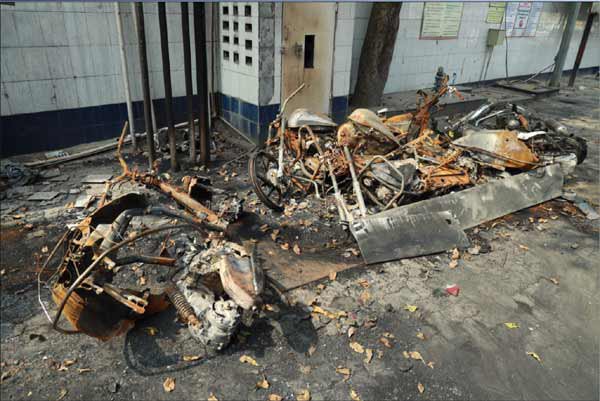 Against this backdrop, “criminals” targeting minorities in a few localities of the capital city seem a much smaller figure. This is one side to this violence. On another, when compared with cow-lynching cases and others in which a few Muslims and secular Indians were deliberately targeted simply on account of their religious/secular identity, Delhi violence is a much larger version of those criminal activities. There is yet another angle which cannot be ignored. If cow-lynching cases and murder of secular Indians seem criminal activities indulged in, almost secretively, the same cannot be said about Delhi-violence. These were cases of a few individuals targeting Indians and their property openly and as reported, at times with support of local policemen. This seems continuity of violence earlier displayed in Jawaharlal Nehru University (JNU), Jamia Millia Islamia and also in Aligarh Muslim University (JNU). While the anti-Muslim label cannot be tagged with the violence in JNU, the same cannot be said about the violence in other places. The similarity in all is that of criminals being linked with saffron extremists.

Certainly, a lot has been said and written about policemen being responsible for not providing security to those affected by violence and also indulging in similar activities themselves. Yes, they have failed in their duty. But there is yet another side, which must be paid at least some attention. Should their own “mindset” poisoned by anti-Muslim notions be blamed for this and/or does the blame rest elsewhere? Well, some policemen probably do suffer from holding an anti-Muslim attitude but the same cannot be said about each and every policeman. Besides, the patterned uniformity visible in their conducting reported criminal activities must be taken note of. It was not the case of just an individual policeman entering Jamia Millia Library and that of reported cases of beating Muslims during three-day violence in the Northeast district of Delhi. Nor can only one or two be held responsible for not checking criminals in attacking Muslims and their properties.

The preceding point suggests that the possible linkage between policemen’s reported inaction and rioters’ violence cannot be sidelined. But all policemen would probably not do it, as one group, out of their own choice. Possibility of their being pressurised to do so must be kept in mind. The same may be said about criminals’ moves. As certain reports indicate, the ones who indulged in violence were “paid” to do so and were external elements not known to ones attacked. In fact, reports of Hindus helping their Muslim neighbours and vice versa must not be sidelined. What stands out is the love for money and/or maybe the “need” for it forced external elements to indulge in criminal violence. It was not the case of their doing so out of any religious passion.

This also signals another aspect to this violent drama that was enacted in the capital city. A possible reason may have been to convince the majority community of the communal venom held among their fellow-religious Indians against Muslims. There is no denying that several outlets of communication are still working overtime in spreading negative messages about Muslims. This apparently could be a part of their strategy to polarise vote-banks along religious lines. Whether it is so or not, that external elements were paid to create tension in Northeast Delhi cannot be ignored. This only suggests that use of the religious card in spreading communal venom against Muslims has not succeeded. This has been further proved by the manner in which non-Muslims, including Sikhs, Hindus, Christians and others, have moved forward to do their best for those in distress because of the Delhi-violence. Their decision to do so has not been affected by communal poison being spread against Muslims.

Rather, it seems anti-Muslim communal poison and activities have considerably enraged a large number of Indians. And they are going out of their way to help affected Muslims. It is not the case of just a new generation moving forward but also that of the communication boom prompting majority of Indians to view and analyse situation from their own perspective. That they have refused to believe and be moved by anti-Muslim communal missiles should serve as a wake-up call for those indulging in spreading the same. They must remember that if Gujarat-carnage had not occurred, Vajpayee-led NDA government may have returned to power for a second term.