The caravan of the dignified, despairing and the defeated will remain etched on my mind like a Biblical catastrophe, custom made for a Cecil B De Mille extravaganza.

(Those in self exile are returning because they have no choice,

In any case, these alien streets may have promised a paradise, but home is home after all.)

In Firaq’s framework the “exiles” are returning where idyll once was. In the swirl of new economics, they may well be jumping from the frying pan into the fire. But even so, as Garcia Marquez reminds us, “home is where someone of your’s is buried.” That was where the multitudes were headed.

There were always two lockdowns: a medical lockdown for “us” and an economic lockdown for “them”. I am flattered that my sacrifice, in the course of this confinement, qualifies me as one who “helped” the nation: I have stopped going to the gym in the nearby hotel. People had made sacrifices, the Prime Minister said, by not visiting gyms, malls, cinema, clubs etcetera during the lockdown. 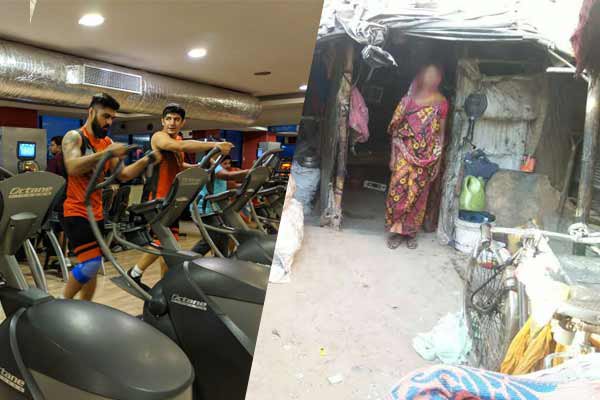 Since the gym is also patronized by hotel guests, many of whom are foreigners, there was a real danger: I could have contracted the disease. I stopped visiting the gym only in mid-March. But once the lockdown was imposed our mobile would not stop ringing. There was advice galore: Manju, who helps part-time with cleaning and dusting should be asked not to come. She may be a carrier. I did put forward my plea for Manju. I was much more likely to infect her than she the family. I was the one who met foreigners. Poor Manju met no one except her frequently drunk husband.

I was simply trying to be logical. My head is spinning with volumes of data on the pandemic. Of the countless images, the one that has stayed in my mind is a thick, wide band, in the same latitude as Wuhan, hanging in the air. This band encircles all the countries intensely hit by the virus. We in India have been sporadic recipients of the infection from visitors and Indians returning from Italy, Spain, UK, Malaysia, Japan, Korea, Indonesia, the Gulf, US and, above all, China. One has to make a return journey to Shanghai (as this reporter did) to meet throngs of traders during the flight travelling to the remotest parts of China.

What does poor Manju have to do with international travelers? But we asked her not to come for the time being. In doing so, I could not stop spotting in ourselves an easy acceptance of segregation instinctively.

How can I forget neighbours, indeed a cross-section of metropolitan India on TV: kitchenware transformed into drums, people blowing conch shells, clapping, leaning over balconies of their high-rise houses. Later, with equal enthusiasm, they lit candles, and “mashaals” reminiscent of some forgotten victory. People were celebrating because they were secure and protected from the virus. But with Manju gone, who would scrape the floor of melted wax? Who would clean the house? Then came word from the grapevine: her neighbours had joined the trek on foot to heaven knows where.

This calamitous experience has been a mirror, showing up the warts we had forgotten. My wife and I were surprised by the response of friends we called. We were trying to share our concern at the hundreds of thousands on the move. “Look after yourselves” we were told. We were being advised not to be nosy. The unstated message was transparent: those who had started walking to their villages would be eventually looked after. Traces of “fatalism” we are heir to?

Socialist leader Ram Manohar Lohia’s principal objection to the “class analysis” of the communists was straightforward: “In India, class and caste is coterminous.” How does Lohia’s dictum apply to the impoverished multitudes on the walk? Do they all end up on the lower side of the caste divide?

I suppose we have to bring in Manto to settle the issue: “the religion of an empty stomach is Roti (bread).” In his scheme, shared distress is a greater equalizer than all affirmative action. In this regard, there is a lesson in the profile of the Indian indentured labour in South Africa, Fiji, West Indies, Mauritius and Reunion. Shared experience on the sugar plantations was an “equalizer”. Books by Fiji’s best known author, Satendra Nandan are replete with stories of “Jahazbhais”.  Jahaaz or the ship which carried them from the interiors of UP and Bihar became an unforgettable experience in bonding.

The narrative of the post-Corona poor on the move is starkly different. The indentured labour and their progeny turned their backs on their villages. They placed whatever they had left behind on what Ghalib calls “taaqe nisiyan” or the cornice of amnesia.

The caravans of the famished on foot who balanced their tiny bundles on their heads, to the contrary, turned towards the villages they had once abandoned. How will they ever comprehend arcane viruses? Figures mean nothing to them. In 2017, for instance, 87,000 children of ages upto four years died every month, mostly from malnutrition in our country. 938 adults died everyday from respiratory ailments; 1,421 from diarrhea and so on. How will they ever understand that in the US an average of 79 per million of population had died from Corona virus as on April 15. The comparable figure for India was 0.3 per million. They don’t know viruses. In a daze, they are staring at another wolf salivating on them. A bigger shock awaits when they reach their destinations: over 11,000 farmers commit suicide each year. But we, in our apartments are grateful for being effectively protected from the virus.

Let Satendra Nandan, now Emeritus Professor at the Australian University, Canberra, have the last word: “British colonialism was cruel to the indentured labour. Our ancestors suffered. But consequences of colonial action look benign compared to the experience of the migrant labour in his own country!”