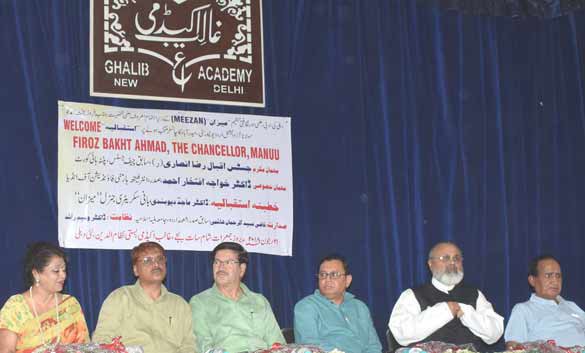 Speaking on the occasion, Iqbal Raza Ansari, ex-Justice, Patna High Court, stated that being the grandnephew of Maulana Abul Kalam Azad, the first education minister of India, he has been following in his footprints as he is a prolific writer who has authored many books in Urdu, especially on children’s literature. He is also a freelance journalist and columnist.

According to Khwaja Iftekhar Ahmed, chairman, Interfaith Harmony Foundation of India, Bakht has struggled a lot in order to come up to this level and is a self-made man. He added that the nation and community have a lot of hopes from him as he has carved his niche by dint of his hard work and honesty. He also stated that Bakht happens to be the unique tri-lingual columnist who has written on a variety of topics including interfaith concord, uplift of Urdu medium schools and madrasas and the campaign to urge the Muslim girls to study science.

While discussing Firoz Bakht’s exploits, to protect the monuments through the umpteen PILs, the organizer and celebrated Urdu poet, Dr Majid Deobandi said that by saving monuments, like, Ghalib’s Haveli, Anglo Arabic School, Maulana Azad’s mausoleum, Bahadur Shah Zafar’s tutor and court poet, Zauq’s mausoleum, besides many others, he has rendered a yeomen service to the cause of decaying monuments and above all, Urdu.

Firoz Bakht Ahmed, Chancellor MANUU stated that he would not take up the new assignment just as a ceremonial post or uplifted position but as a commitment as a lot needed to be done at MANUU. He added that he aims at opening the students even to all the non-Urdu knowing students with a condition that Urdu would be an additional subject in the opening year. He also emphasized the need of a model madrasa as the madrasa students are very bright and brilliant and needed the guidance simultaneously in the secular education as well to carve a niche.