New York, NY (September 5, 2018): The Coalition for the Defense of the Constitution and Democracy (CDCD) unequivocally condemns the brazen attempt by the Vishwa Hindu Parishad of America (VHPA, World Hindu Council of America), Hindu Swayamsevak Sangh (HSS, Hindu Volunteer Corps) and others to provide a platform in the USA for individuals and organizations engaged in fomenting and carrying out acts of genocidal violence against minorities, intellectuals, and human rights and civil liberties activists in India. The above organizations have organized the so-called 'World Hindu Congress' in Chicago from September 7-9, 2018, where they have invited speakers who have taken public positions, made statements, and / or engaged in actions that are fascistic, misogynist, Islamophobic, anti-Dalit, pro-casteist, and homophobic. 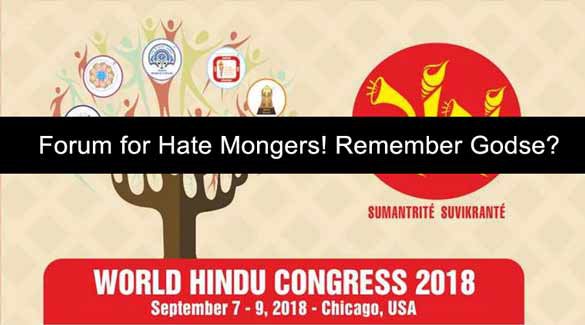 The main organizers of this conference are, not surprisingly, organizational affiliates of the Hindu supremacist Rashtriya Swayamsevak Sangh (the RSS, or National Volunteer Corps) - the parent organization of the increasingly repressive Hindu Nationalist ruling party in India - the Bharatiya Janata Party (Indian People's Party) in India and close affiliate of the Vishwa Hindu Parishad in India - an organization with innumerable smaller affiliates that is routinely linked to the rising numbers of lynchings of Muslims and Dalits in India, and more recently with plotting terror, with a UK Guardian Op-ed calling India 'Republic of Fear', and noted writer Pankaj Mishra speaking about the BJP's 'hybrid methods of repression'.

The theme driving this event is a so-called "Hindu resurgence," - a term that hides behind a benign multicultural mask for celebrating Hindu culture but which conveniently seeks to mask the violent politics of the RSS and its affiliates. For, the 'culture' being celebrated at the WHC is shaped by the fascistic and supremacist vision of the RSS, an organization modeled along fascist Italian organizations such as the Ballila and Avanguardisti and centered on the total abrogation of all democratic rights and norms of governance. Over the last 4 years of the Hindu nationalist Narendra Modi government, there has been a sharp spike in violence against minorities, with many atrocities directly committed by members of the RSS family of organizations including the ruling BJP, with full impunity. The victims of the violence of this 'Hindu resurgence' - known by its more popular name in India and abroad as 'Hindutva' - are Muslims, Dalits, Hindus from oppressed caste groups, Christians, secularists, rationalists , human rights and civil liberty activists, and any opponents or critics of the current political regime.

It therefore is shocking that the two top leaders of the RSS - Mohan Bhagwat and Dattatreya Hosabale are to lead plenary sessions at the WHC, while a host of other major players in the broader family of RSS organizations are participants in various roles. Some examples of speakers listed under the "Education Conference" include Sankrant Sanu who routinely calls the media 'presstitutes' and debunks Islamophobia, and Rajeev Malhotra, a U.S. based entrepreneur and supporter of the RSS who publicly tweeted a few weeks ago that donors for flood-ravaged Kerala state in India should only aid Hindus and not Muslims and Christians. Among those included as speakers in the "Media Conference" section are the editors of the mouthpieces of the RSS ("Organiser") and the BJP ("Panchjanya"). Others such as Suresh Chavhanke, who heads the right-wing Sudarshan TV station has a life-long association with the RSS, and has previously been arrested for 'promoting enmity,' and is also accused of rape. In addition, prominent figures from the film industry who have publicly embraced the politics of the RSS and BJP such as Vivek Agnihotri and Anupam Kher, who not too long ago were actively inciting mob and state violence against students in Jadavpur University and Jawaharlal Nehru University, publicly labelling government critics and human rights activists as 'anti-nationalists' and 'Maoists', and Shefali Vaidya a prominent Modi supporter who is associated with the notorious rightwing blog "The Frustrated Indian." The organizers of the WHC have left little doubt that they view the event as a platform for their Hindu supremacist movement.

Another prominent inspiration for Hindutva and the World Hindu Congress, Ajay Singh Bisht ("Yogi Adityanath"), was initially invited to speak at the WHC, but for unknown reasons is no longer listed as a speaker. He is the chief executive of India's most populous state and has overseen a reign of mob violence by his own party members attacking Muslim and Dalit communities. He has cases pending against him for incitement and violence, and has been the subject of a recent Supreme Court query directed to courts in UP asking why he hasn't been prosecuted for his crimes. Indeed, the Indian Supreme Court itself, given the rise in mob violence including lynchings and the impunity seemingly granted by the Indian government, warned that India is becoming a 'mobocracy.'

By masking their anti-democratic political agenda of Hindutva behind the garb of celebrating 'Hindu culture,' the organizers of the WHC seek to avoid critical scrutiny from the U.S. public. Freely deploying symbols from the Hindu tradition, they seek to convince Americans that their event is about Hinduism. However, many self-identified Hindus would disagree. They would argue that Hindutva is NOT Hinduism. The ruthless persecution of religious minorities, the bold defense of some of the most horrid practices of discrimination and violence against Dalits, and the revanchist anti-woman dispensation of the Hindutva movement, should all give cause for concern among a US public accustomed to viewing such events through the lens of multicultural citizenship.

The WHC is a Hindutva event - built entirely on Hindu supremacist notions and fascistic organizations - whose purpose is to shore up chances for the BJP in the impending 2019 general elections. It is incumbent upon all of us to educate ourselves about the violent ideology of Hindutva, and in particular on members of the press to expose the World Hindu Congress for what it is - a brazen attempt to provide a global platform for Hindutva leaders to aid in the persecution and further oppression of religious minorities, Dalits, public intellectuals, and human rights and civil liberty activists in India. (Coalition for the Defence of the Constitution and Democracy, 48, 7th st, San Jose, CA 95112 USA)