Punjab Disappeared is a documentary which uncovers the decade of enforced disappearances, extra-judicial killings and mass secret cremations that took place in Punjab.  Thousands of people, mainly young Sikh men and boys, disappeared after being abducted by the Punjab police, murdered in staged encounters and their bodies cremated as unclaimed and unidentified. 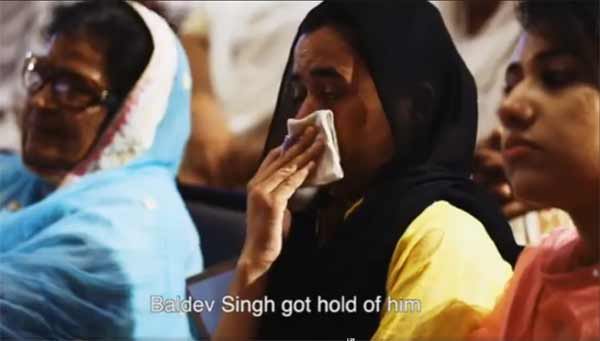 The film traces the work of the Punjab Documentation and Advocacy Project furthering the pioneering work of murdered Punjab activist Jaswant Singh Khalra in identifying over 8000 cases of enforced disappearances and secret cremations from new investigations, and gives fresh impetus to the survivors 25 year struggle for justice.

For years, the voices of the families of those disappeared remained silenced. The documentary explores the complexities of mass state violence in India which is interwoven with their determined voices and the unacknowledged collective trauma shared with other genocide survivors.

The film narrates, primarily through moving contemporary accounts given by bereaved relatives, of how over thousands of young Punjabi men and in some cases women, were abducted by police or security forces and never seen again. The stories of the disappeared, and their families’ subsequent struggle to find answers to the question ‘what happened to our loved ones?’

The documentary critiques the significance of the Punjab conflict and whether lessons from Punjab were learned in the context of contemporary mass state violence in India: Midnight knocks, people are taken, never to be heard from again and the multi layered actions taken to cover these mass crimes.

The Peoples Tribunal expert panel of activists, lawyers including a retired Supreme Court Judge, critically examine the role played by state institutions and why despite endemic and institutional failures, the struggle for justice and accountability is enduring.

The viewer is taken through an often-emotional journey of grief, fear and despair but ultimately the film carries a message of hope, and resistance.  Expressing solidarity, support and a shared desire for justice, survivors from Manipur, Kashmir and Chhattisgarh ask difficult and searching questions of how the security forces in India are still able to act with impunity, and the relevance of Punjab to the victim families of other conflicts in India. Punjab Disappeared is a clarion call for the State and civil society to take action now, for truth, justice and reparation, and most importantly for non-repetition through the indomitable spirit, dignity and determination of its survivors.

The world premiere of the documentary, followed by a panel discussion is the 26th of April 5:30 pm at the Jawahar Bhavan (opposite Shastri Bhavan) Dr Rajendra Prasad Road, New Delhi, tel: 8860268853.