Ramadan best time to give up smoking

Dr. Javed Jamil 21 May 2018
How can smoking be Halal in Islam, a system meant for healthy Life? Quran clearly points that God has allowed all wholesome things and banned all unhealthy and unhygienic items and practices.

Ramadan can and should be the best time to give up all forms of addictions including smoking forever. I will focus here on smoking only because while alcohol and drugs are considered Haram by all the religious experts of Islam, unfortunately, smoking has not yet been declared universally Haram. This is despite the fact that smoking kills and devastates much more than the other addictions. 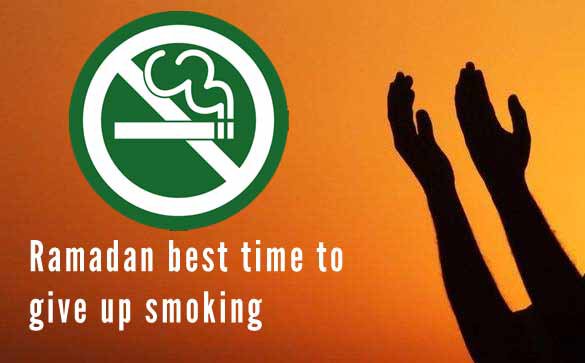 It was in late 1980s when this writer had authored an article “Why Cigarette Smoking should be declared Haram” It was published first in Radiance and was then republished in many other magazines and newspapers including The Kuwait Times. Subsequently, certain religious scholars in Egypt had issued an edict about Cigarette smoking being Haram. But unfortunately, the movement did not pick up, and smoking continues to be a major health hazard not only in the world as a whole but also in Muslim countries including the Arab world, Iran and Malaysia. Muslims tend to consider it permissible.

Let us first see how much important health is in Islamic system of affirs. The truth is that Islam is meant for protecting life, booth in this world and the Hereafter, keeping it healthy and ensuring the highest standards of healthiness. We will see below that Islamic permissions and prohibitions are largely dependent on the impact of the practices on health. In fact, while Islam gives maximum importance to health, the current world order compromises health for the sake of economics.

Health is arguably the most important gift of nature to man. Prophet Muhammad (SAW) has also described well-being as the biggest gift of God to humans. Without health, life becomes an unmeaning burden.

This categorisation is extremely important; this, in fact, makes the Islamic Shariah the most scientific system of the world. It also gives certain flexibility to the Shariah, which makes life easy for even those having weaker convictions.

The Qur’an itself declares that it allows what is good and forbids what is bad. Now, when we study various prohibitions and obligations in Islam, we find the categorisation of acts, where they are related with health, to be based on the following principles;

In the book, “Quranic Paradigm of Sciences & Society” (First Volume: Health”, I have developed a Quranic dynamic paradigm of health. While the WHO Definition of Health describes health as “a state of complete physical, mental, social and spiritual being” with the onus of maintaining health only on individuals without fixing the responsibility of maintaining health on system, Islamic definition of health, developed by this writer, is much broader:

It is on the basis of this definition that I have advocated Right to Health as a Fundamental right. When the right to health becomes a fundamental right, smoking, drinking and uninhibited sex would automatically become unlawful; for each one of these is responsible for increase by millions in the annual mortality and morbidity. This will result in a momentous fall in the incidence of diseases like lung cancer, mouth cancer, cirrhosis, ischaemic heart diseases, peptic ulcers, bronchitis, Korsakoff psychosis, syphilis, gonorrhoea, Chancroid, herpes, AIDS and a number of psychiatric diseases. The crime, accident and suicide rates would also decline substantially.

Quran clearly points that God has allowed all wholesome things and banned all unhealthy and unhygienic items and practices. Quran has also clearly asked not to put oneself in situations causing death:

“And spend in the way of Allah and do not throw [yourselves] with your [own] hands into destruction. And do good; indeed, Allah loves the doers of good.” (Al-Baqara, 2: 195).

“O you who have believed, do not consume one another’s wealth unjustly but only [in lawful] business by mutual consent. And do not kill yourselves. Indeed, Allah is to you ever Merciful.” (Al-Baqara, 2: 29).

It is clear that Quran prohibits anything that endangers life. How can then smoking be Halal? Some people argue that smoking does not cause the fogging of mind or intoxication like alcohol and drugs. They forget that it is threat to life and not the fogging or intoxication which is the primary criteria of prohibition. Pork, meat of dead animals, promiscuity and homosexuality do not cause “Khumaar” but have been expressly prohibited.

There are1.3 billion smokers in the world. In an initial estimate of factors responsible for the global burden of disease, tobacco, alcohol and illicit drugs contributed together 12.4% of all deaths worldwide in the year 2000. Looking at the percentage of total years of life lost due to these substances, it has been estimated that they account for 8.9%.

It can be seen that Tobacco is a bigger killer than even alcohol. According to latest estimates, more than 6 million people are killed by tobacco compared to 3 million by Alcohol. How can such a big killer be Halal? In addition, tens of millions develop severe respiratory illness causing breathlessness and cough and crippling heart diseases. The markets earn hundreds of billions, and this comes from the pockets of the people at the cost of their own health. The Islamic scholars cannot remain sleeping over this huge hazard to life. They need to sit together and issue a categorical fatwa declaring all forms of tobacco including smoking Haram. Quran favours “Tayyab” things and disfavours “Khabaaith”. Can anyone say that Cigarette Smoking is Tayyab, not KHabith? Once they do it, the governments, at least of Muslim countries, will be under pressure to ban the manufacturing and supply of the tobacco products.

The smokers have a golden opportunity to give up smoking during Ramadan. If they are fasting, they are keeping away from smoking for more than twelve hours in most parts of the world. Just avoid smoking after the break time for a few days, and they will find it easy to give it up forever. They must remember that addiction can be given up only through quick abandoning; attempts to do it slowly are bound to fail. The higher spiritual level in Ramadan is more likely to help their cause. If they take it as Haram, it will be easier for them to quit. Let every smoker and tobacco chewer take a pledge to give up their addiction forever! This will be one of the biggest thanksgivings to God in the month of Ramadan.

Dr Javed Jamil is India based thinker and writer and Head of Chair in Islamic Studies & research, Yenepoya University, Mangalore,  with over a dozen books including his latest, “Muslim Vision of Secular India: Destination & Road-map” and  “Qur’anic Paradigms of Sciences & Society” (First Vol: Health), “Muslims Most Civilised, Yet Not Enough” and Other works include “The Devil of Economic Fundamentalism”, “The Essence of the Divine Verses”, “The Killer Sex”, “Islam means Peace” and “Rediscovering the Universe”. Read more about him at http://www.worldmuslimpedia.com/dr-javed-jamil. Facebook page: https://www.facebook.com/javedjamil2015; alsohttp://javedjamil.blogspot.in/. He can be contacted at doctorforu123”yahoo.com.