Is Muslim Person Law Board really serious about its business?

The first time I heard about the All India Muslim Person Law Board (AIMPLB) was in early 1980s, when I was still in school. The predicament was the infamous Shah Bano case. I was too young then to comprehend much about the AIMPLB or Muslim Personal Law, but from whatever I could gauge from the parochial discussions, AIMPLB was not being upheld in a good taste. It came out as a group of exceedingly orthodox, patriarchic, and unapproving (often traditionalist betel leaf-eating) statesmen bent on disregarding social reforms of the Muslim Indian community and demeaning the rights of women in Islam. More than 30 years down the line, AIMPLB has done very little to mitigate this image of itself. 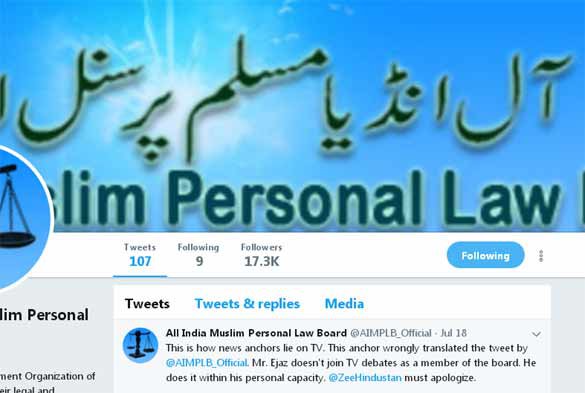 One reason AIMPLB has been able to preserve such an adverse and deleterious stance among the sociopolitical edifice of India is its shabby and dilapidated media and PR strategy – which is not just inane but also devoid of a preemptive perceptive at the same time. This is in stark opposition to its primary objective of “adopting suitable strategies for the protection and continued applicability of Muslim Personal Law in India”.

For example, a meticulous look at some of the arguments made by AIMPLB in defending Triple Talaq:

1.      Shariah gives husband the right to divorce as men have greater power of decision-making and are more likely to control emotions.

Statistics go on to prove the opposite – most of the Triple Talaq instances for example, have been given in a fit of rage, which implies that men have proved not being capable of controlling their emotions. Other instances actually show a blatant misuse of this power of Talaq to intimidate women and keep them under duress.

2.      When a marriage is in turmoil and husband wants to “get rid of wife”, legal compulsions and time consuming judicial process may come in the way. It could lead to “extreme cases” where husband may resort to illegal ways of getting rid of her by murdering her.

This reason logically goes against the AIMPLB’s stance of defending Triple Talaq. It makes a point that Triple Talaq is being used as a means TO GET RID OF WIFE. It is not just ridiculous but also despicable and appalling to ASSUME that denial of Triple Talaq shall lead to murders. Did AIMPLB have any evidence or statistical data to prove this statement? Such immature and infantile arguments (or rather assumptions) are not admissible in Court, which AIMPLB should have realized before making a laughing stock of itself. Seems it was too much of a cognitive pursuit for the AIMPLB to highlight the fact that “abandoned women vastly outnumber victims of Triple Talaq” because of the tedious and time-consuming divorce procedures of conventional courts.

3.      Marriage, Talaq and polygamy are interwoven with religious and cultural rights of Muslim and cannot be interfered with by the legal courts.

This was yet another unformed and callous statement given by AIMPLB to defend Triple Talaq. Does it really believe Talaq and polygamy are RIGHTS of Muslims? To Allah, Talaq (not Triple) is the most disliked of all the things that have been made Halal for humankind. And coming to think of calling this a RIGHT of Muslims is indeed something really disgusting.

As for polygamy (it is actually polygyny), it seems AIMPLB likes to enjoy the right of something that Quran discourages in the larger interest of safeguarding and ensuring better justice – “… but if ye fear that ye shall not be able to deal justly (with them), then only one, that your right hands possess, that will be more suitable, to prevent you from doing injustice.” Was the AIMPLB talking about the Arab culture of polygyny while trying to defend it as part of the Muslim Personal Law in India? The rate of polygyny among Muslim Indians is a mere 5.7% (lower than that among the Hindu Indians).

4.      Personal laws of a community cannot be “re-written” in the name of social reforms… The board said that practices provided by Muslim Personal Law on the issues of marriage, divorce and maintenance were based on holy scripture Al-Quran and “courts cannot supplant its own interpretations over the text of scriptures.

This argument given by AIMPLB is plainly naïve, concocted, and unacceptable. It is interesting to note that Quran does not make any mention of Triple Talaq, but the AIMPLB wishes to uphold and defend the same malpractice under the garb of defending Muslim Personal Law. So who is trying to rewrite personal laws against social reforms is pretty evident.

Similarly, for Nikah Halala, the AIMPLB holds that “…thepractise is in line with Islamic law”. Zafaryab Jilani goes on to defend Nikah Halala by stating that “It is a must that the wife is divorced again.” The way the practice (or malpractice) of Nikah Halala is executed is not only illogical but also against Islamic principles – marrying with the intention to divorce is Haraam (illegal, forbidden, a sin). Interestingly, AIMPLB also recognizes this fact; but still stands to justify its stand on Nikah Halala. The Quranic principle of divorce ensures that ample time is given for a divorce to be enforced correctly. It is only when Triple Talaq is given emotionally and hastily that the issue of Nikah Halala arises at the first place – most seemingly out of regret.

AIMPLB’s most recent stand on Daarul Qadhas (or Shariah Courts) is also replete with its adverse, deleterious, and shabby PR stance. The statement to open Daarul Qadhas in every district of India came at a time when the Muslim Indian sociopolitical identity is already under attack. As maintained by Prof. Faizan Mustafa, senior Professor of Law and Vice Chancellor of Nalsar Law University, the issue of opening Daarul Qadhas may have been just one of the many agendas requiring further discussions and elaborations in a recent AIMPLB meeting. However, this statement of controversy was given out to the media on a platter in the most irresponsible and immature way. It seems AIMPLB either does not have any credible and preceptive policy on its members releasing statements to the media or the Board itself is indifferent to the repercussions of giving such statements at vexing times. Evidently, the AIMPLB seems to have no organizational control over its members and anyone and everyone can become a spokesperson of the Board without having the least qualification to do so.

It is under this ambit of vexing times when a prominent member of the AIMPLB, who is probably devoid of any decent debating ethos and etiquettes, goes on a live television debate, argues indecently with female panelists, and creates a national controversy by slapping a female panelist. I am not going to underline the preceding milieu that lead him to slap the female panelist; and what went wrong, who was right, and who was wrong. However, the fact remains that retaliating in the way he did does not really befit AIMPLB representation. Unfortunately, this member of AIMPLB is now in police custody but the Board has not taken any action against him. The unsolicited and obscure message that this conveys is that probably AIMPLB endorses his action.

The AIMPLB has been mostly engaged in what it calls a fight to preserve Muslim Personal Law. What it has been evidently doing all along is preserving and endorsing malpractices that have cropped up in the name of protecting the Muslim Personal Law. Its media and PR management strategy is pathetic – to say the least: devoid of any scientific approach, lacking coherence and perceptiveness, and probably bereft of any evident desire to actually counter the sociopolitical propaganda being put up against Muslim Personal Law and the right to practice Islam in India. It is this elusiveness of the AIMPLB that sometimes makes me feel whether the Board is really serious about its business. If yes, it needs to demonstrate the same by taking more judicious and incisive steps towards revamping its overall functioning, specifically its media and PR management.