By Dr. Mohammad Najeeb Qasmi 27 Aug 2019
What is Talaq and correct way of Talaq?

Under the guardianship of Bharatiya Janata Party (BJP), the Central government has finally passed the bill for the triple Talaq where a man who gives a divorce three times will be imprisoned for 3 years. This has neither been implemented in any part of the world nor has any law of this type been implemented in the sacred land of Allah until today. And neither is there any connection of the punishment given for this in the Quran and Hadith, which are the two sources for the Islamic Sharia Law. It means, now, in our great India (Bharat Mahaan), if a person’s wife goes to the police station and reports against her husband, that he has given her triple talaq, (whether it is true or not), then the husband will have to face the torture and problems of the jail for 3 years and also provide for the maintenance of his wife and kids for these three years while he is in jail. The government is showing false sympathy towards the women in the name of triple Talaq. The government is not ready to bear the expenses of the wife and kids even for school or health issues while the husband is in prison. You can judge yourself how the husband will deal with his wife after he comes out of jail. 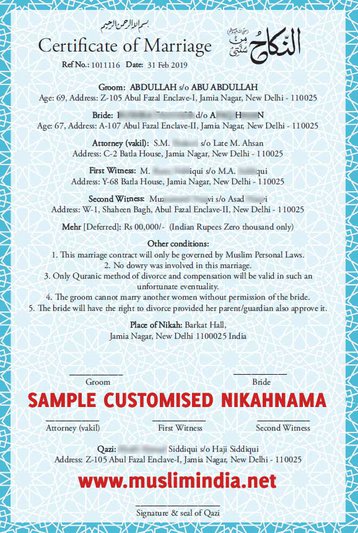 Sample customised Nikahnama with terms mutually agreed should be considered by people getting married. Also do not let the govt. registrar of marriages force you to register under Special Marriages Act which is not for Muslims but for inter-religious marriages which are not governed by Personal Laws.

The leader of all the prophets, Prophet Muhammed ﷺhas declared divorce to be an evil deed from all the legal and permitted matters. But, after this bill, divorce will become a joke, which will only fulfil the objectives of the BJP. That is, in case of differences between the Muslim couple, the wife can misuse the bill and send her husband to jail and take her revenge for any dispute that might have arisen between them, and then there will be a continuous war between the two families. Consequently, the families of the women have started misusing this bill against the husband for all different older issues and filing the triple Talaq case on him. It’s obvious that the present government will send orders to put the husband in jail to fulfil its intentions.

After the implementation of this triple Talaq bill and its three year sentence to jail, we have to create an awareness in the Indian Muslim citizens that no one should give the triple Talaq on trifle issues, but if there are differences between the couple, then it should be solved according to the teachings of the Quran (Surah an Nisa: 35) where some people from both the families should be made in charge to fix the matter. In short, every possible attempt should be made that the marital relations are not broken. However, in certain circumstances, it could be difficult to make a compromise between husband and wife, and staying together becomes impossible, then in this situation it is better for both the parties to consummate the marital relationship. That is why the Islamic law (Sharia) has legalized divorce. This is the supreme attribute of the religion of Islam that if the couple is unable to compromise and stay together, then the marriage relationship can be consummated in a good way by giving a divorce and this process of breaking the tie is called Ṭalaq (divorce). The best way to apply Ṭalaq is to pronounce only one Ṭalaq observing two conditions: (1) when the wife is in ritually pure condition (i.e. not in her menstrual cycle) and (2) the husband has not had sex with her in that ritually pure period. In this case, it will be a revocable divorce and the husband, if he wants, may resume his marital relation with his wife without having to reconduct the Nikaḥ. The couple may even remarry if the expiration of the waiting period called “Iddah” is over. Though the wife divorced in this manner may marry someone else yet it, at the same time, allows the couple to reconduct the marriage and resume the relationship.

Ṭalaq – the unilateral right of the man to divorce his wife:  Man as compared to woman usually has a better ability when it comes to take a serious decision. A comparative study of men and women in terms of their respective physical, emotional and intellectual strength and weakness is enough to make one realize that men do indeed have more strength and ability to carry out hard tasks which are usually very difficult for women to do and therefore men are supposed to rule and take care of them and the other affairs. Better than trying to act like a ‘rationalist’, we should try to reflect over what the Creator of men and women says in this regard. It is narrated in the Holy Quran: “But the men have a degree over them [in responsibility and authority].” (2:228) and “Men are in charge of women.” (4:34) The Qur’an is clear in that men should lead women in the journey of life and take decisions when required though they should at the same time consult and ask their women as to what they see in the matter concerned. That is the reason only men are given the right to give divorce.

Khul’ (or Khula as usually pronounced):On the other hand, it is not that women have been deprived of the right to separation in the absolute sense. If a wife wants separation, either because her husband is not fulfilling her rights or for some other reason, she is entitled by the Sharia to demand divorce from her husband. If it is  proved that the woman is really oppressed, the man is required to fulfil her rights that she is entitled to as per the Sharia or answer to her demand for divorce without or with an exchange of an agreed upon amount of money. But if the husband refuses to give divorce, the wife may consult a Sharia court or council so that the Qaḍi (Islamic judge) may force the husband to divorce his wife. Thus the wife will be considered a divorcee and may marry some other man after completion of her Iddah- the post-divorce waiting period. Khul’ entails Ṭalaq Ba’in, an irrevocable divorce which implies that if the man and woman (who are no longer husband and wife) want to live together again, the husband cannot take her back as his wife without reconducting Nikah with consent of both the parties.

Ṭalaq Raj’i:Using clear unambiguous terms in divorce such as ‘I divorce you’, is called Ṭalaq Raj’i which does not terminate the bond with immediate effect but lets it last until the period of Iddah– the post-divorce waiting period– is over, hence the man may reunite, if he wants, with his wife anytime within Iddah without having to reconduct the Nikah as marriage is still intact.  In doing so, consent of the wife is not required as per the Sharia.

Ṭalaq Ba’in:Using words that do not explicitly imply divorce such as ‘Go to your mom’s or ‘I have left you’, entails irrevocable divorce provided such words are uttered with the intention of divorce. This will terminate the marriage with immediate effect and the only way left for the couple to reunite is by reconducting the Nikah.

Ṭalaq Mughallẓ:Giving three Ṭalaqs altogether or separately whether in one sitting or more is called Ṭalaq Mughallẓ, resulting in termination of the bond with immediate effect as well as prohibition of reconducting the Nikah for the couple unless the conditions of Shar’i Ḥalalah are fulfilled which then will permit them to marry again. To explain it further, if the divorcee wife marries some other man on her own and has sex with her new husband and then the man dies or divorces her of his own free will, it will permit her ex-husband to marry her again after termination of her Iddah, the waiting period she has to observe after divorce by her second husband or his death. Allah, the Exalted, says in the Qur’an: “And if he has divorced her [for the third time], then she is not lawful to him afterward until [after] she marries a husband other than him. And if the latter husband divorces her [or dies], there is no blame upon the woman and her former husband for returning to each other if they think that they can keep [within] the limits of Allah.” (2:230) This is what Ḥalalah means as stipulated in the Qur’an. The following conditions must be met for Ḥalalah to be valid:  (1) The second Nikah must be conducted in accordance with the Sharia (2) The second husband must have had sex with her (3) The second husband must have divorced her of his own free will or passes away and (4) She must have completed her ‘Iddah. Conditional Nikah under the pretext of Ḥalalah is forbidden.

Islam has laid much emphasis on maintaining the sacred bond of marriage with utmost care so that no one dares to break the tie, for it not only affects the couple but also renders life of the children miserable and causes tension between the families. Islam has, therefore, set up clear directives for both husband and wife to sustain and strengthen the bond. If any misunderstanding arises between a husband and wife, they first should try to sort it out on their own. If it is the wife’s fault, the husband should, according to Islam, makes her realize the fault in a kind or harsh manner as required. On the other hand, a husband is asked not to take his wife as a maid servant; she does indeed have rights over her husband that must be fulfilled. Besides providing proper accommodation and maintenance, she also deserves attention and care in respect of other physical and mental needs. As narrated in a Ḥadith that the best among people are those who are the best to their families, apparently a person cannot be a good person in the views of his family if he does not fulfil the rights.

Finally, once again I request the Ummah to not give three divorces together. If the divorce is final, just give one a divorce. When divorced, the parties should consult the Islamic scholars instead of going to court to make decisions according to the Islamic Shariah.